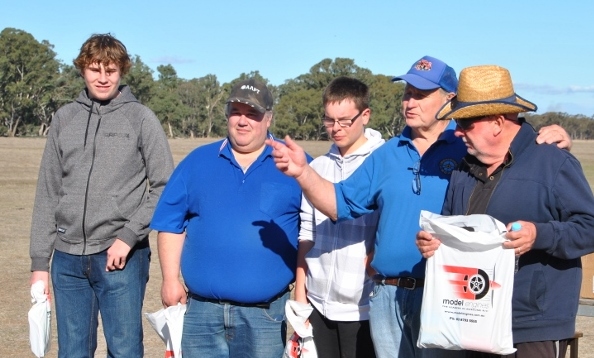 Sixteen Scanners all in a row, Sixteen Scanners see how they go, that might rhyme but we did have a great time, under almost perfect weather conditions in a lovely autumn day, cool to start then lovely warm day with very little wind, 10 points to the weather Gods they got it right, Sunday the 3rd of May.

The entry interest was at the max number of 24 but as time went on 8 had to withdraw for various reasons such as distance, work commitments, prior engagements and 3 of our own club members who could be said to be on the sick list, never mind this wont stop the sixteen pilots from having fun with our Scanners.

The course was set up, the timing cage was in place, turns lights were working, entry monies had all been collected membership cards had been checked, every thing was set and ready to go come 10 am the start time.
So the briefing and welcome call went out to the pilots to gather around in preparation for the start of another fun filled day of Model Engines Scanner Challenge, number 3.

So what is the Scanner Challenge, to race around a triangle course from a standing start as fast as you can, each pilot is timed against the clock in your given lane. All aircraft take in a staggered start of one second intervals and when the aircraft reaches number one pylon marker, and the turn light comes on the clock starts counting until the ten laps are completed, then the score is given.

Race time the first 4 Scanners are on the start line , the identification checks done, radio checks done, its time to start your engines, the Scanners are flagged of one at a time and the race is on, without any streamers or ribbons hanging of the tail this is circuit racing not aerial combat.

Three rounds each with four heats, twelve races were completed before the lunch break, it can be seen who are experienced flyers as they settle down and fly a tight line straight off, while the others are a little way wood in the early rounds but they get better as the day goes on. The grading system of the pilots helps to keep the speeds very similar in a lot of the races, which makes for more fun and excitement , not only for the pilots but also for the spectators as well.

During the lunch break demo race was put on by 3 pilots with their Large Scale Racers, the Seagull ARF Nemesis aircraft with 80 inch wing span powered by 35cc petrol engines, this is the new class that's coming in this year know as F1 or Nemesis 35 Class. All pilots just love flying these Nemesis they say its one of the nicest planes to fly.

Lunch is over and its back to the Scanner racing, in heat one Jay Everitt and Les Davis were dicing with each other having a ball, while in heat two Andrew Ward was way out in front but the other 3 in this heat were having there own race swapping the lead many times. Heat three saw Gary Schmedje and Brodie Hunter chasing each other around while Steve Axford and Kevin Stockdale both first timers here in Bendigo loved the adrenalin rush and I'll bet they'll be back next year to do it all again.

There has to be one heat that stands out and its Heat 4 this is where "Murphy" kicks in, and cause the mid air collision between Jack Andrews and Lucy Simkin Jack's Scanner went to ground but Lucy's without any tail feathers flew vertical up to 300 feet before making nice wingover and then headed for the dirt, must say it was a spectacle to watch.

Racing is now over its time to say thank you to all the helpers, the 4 in the timing cage Jordan, Declan, Noel and David, the canteen staff who keep the food and drinks up to us, Ken Alan and Andy, and there's two more Graeme, race starter and Roy for the photos.

Thanks must also go to Model Engines for giving us the opportunity to conduct this wonderful event in Bendigo for them.

See you all next year !